Digital technology has been transforming all aspects of my art making and presentation, specifically in the following areas:

Speed and Fluidity of my Mark-Making

Digital mark-making has rapidly evolved in a short period of time since David Hockney produced his 51 prints using the Brushes app on his iPad for his ‘Arrival of Spring’ exhibition in 2011. With the introduction in 2015 of Apple’s Pencil as an accompaniment to the iPad Pro, touch sensitive technology is providing a viable and enjoyable addition to the analogue world of mark-making. As an artist, I now have the opportunity for limitless experimentation across platforms; marks can be deleted, reintroduced and collaged. Drawing, painting, as well as moving images, can be combined, layered and rearranged within the same piece of work in less time than it would take to gather the materials around me in my studio to do the same thing. As a result, I can now work faster, across a number of virtual mark-making platforms in a fraction of the time, space and cost. In the examples below you can see how quickly I’ve been able to paste an image from the web into Adobe Sketch, use it as inspiration for a background sketch or a character and then play around with sizing and placing a character within a fictional setting. In the analogue world, I would have used a paper sketchbook, magazines, scissors, glue and various graphite pencils and felt pens to do the same thing in probably three times the amount of time that it has taken me to do this in the digital world. 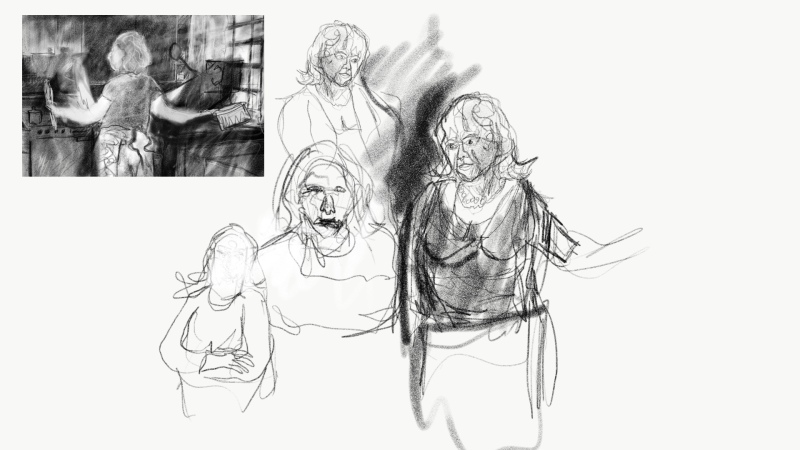 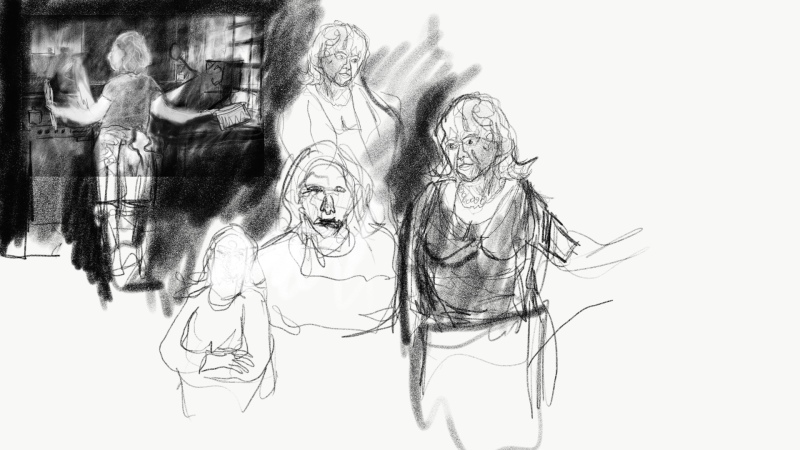 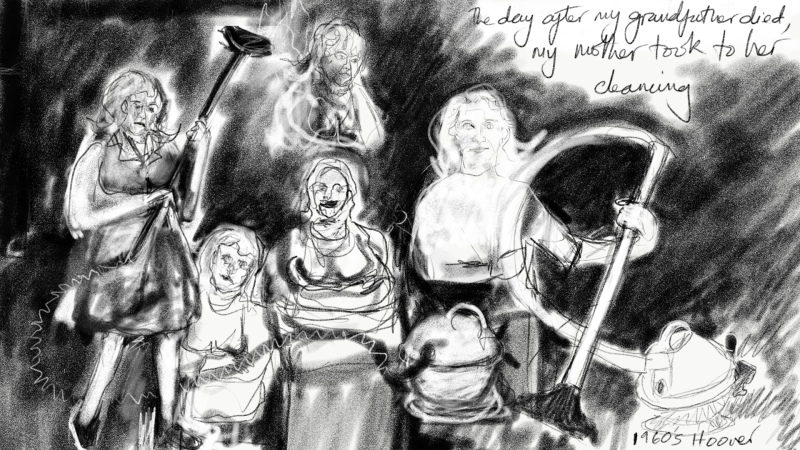 Making the Leap into Animation

Most professional digital mark-making applications now allow idea development to be recorded in real time, mark-by-mark, from the tentative first sketches to the final product. In the process of making sketches such as the ones shown above, it didn’t take me long to realise that it wasn’t such a big leap to move these sketches into the field of animation.

Using collage within a digital format to develop ideas for a fictional character.

Using collage within a digital format to develop ideas for a fictional setting.

There are some further examples below of this sort of sketching. In the first you can see sketches using the Adobe Sketch app. I made them over the course of an evening in front of the television. They are quick responses to moving images which hold the beginnings of ideas for character development. This digital format gives the added dimension of showing the process of mark making unedited, in real time.

In the past, when painting in the analogue world, there were many instances when I would have liked to be freer in my exploration of subject matter. I wanted to be able to face a canvas not having any plans, just seeing what would emerge out of the marks. Now, within a digital environment, like a jazz pianist sitting at the piano extemporising and improvising, I no longer hesitate in doing this. Consequently, much of my subject matter will emerge during the process of drawing; making marks and then moving and combining ideas through collage, montage and layering, all of which takes place within a digital environment.

Narrative Storytelling and the Moving Image

The speed at which I can generate images using a small number of apps, enables me to produce clips of animated images which I can then use in the process of constructing a narrative. I approach these clips as if they were moving paintings, or fragments of visual poetry. Narrative sequences gradually emerge out of the process of generating these animated sketches. I don’t write the script first; more often the script and storyboard will come out of the images.  I will start with a sketch of an idea, it may just be a scribble, or it may be a few words that I have written down which will suggest images, and then more images evolve. Gradually separate images will turn into a storyboard, which in turn becomes an animated clip. More animated clips will emerge until I’ve generated a series of clips which will then need to be ordered. By this stage in the process I’ll be able to start to see the beginnings of a longer narrative. It’s then that I’ll start to experiment with a more complex narrative structure and the introduction of sound and/or voice over.